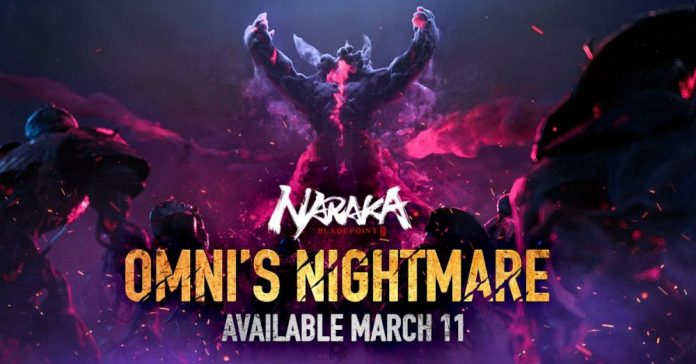 Hangzhou, March 7th 2022 | Leading Chinese developer, 24 Entertainment, is pleased to announce its all new in-game mode, Omni’s Nightmare, where players are pitted against each other, as Heroes or the undead Evil-EntEvil-Ents; in the ultimate fight for survival. Naraka’s zombies are not the lumbering, decaying, shuffling variety; they are fast, they have fight moves, they can level up from securing kills — and they’re a bit handy at lobbing axes too!

In Omni’s Nightmare, players will be randomly assigned to one of three factions: Evil-Ent Evil-Ent, Evil-Ent LordEvil-Ent and the Heroes. If you’re assigned the role of The Hero, you win when all three of the Soul Sparks are lit. If you find yourselves in the body of the undead with The Evil-EntEvil-Ent’s or The Evil-EntEvil-Ent Lord, your way to victory will consist of defeating all The Heroes or if The Heroes fail to light the Soul Sparks in the allotted time.

While playing as the Hero (Human) for the first part of the match, you will only be equipped with ranged weapons and no ultimate move. You’ll need to fight your way through the onslaught to collect resources and submit them to 1 of 3 basements scattered around the map. Be wary of the Evel-EntEvil-Ent (Zombie) players though, they move incredibly fast, have the ability to leap to high places and also throw axes, which deal notable damage. Once you reach particular requirements, the game will move into Phase 2, in which a portal will appear and much stronger weapons are at your disposal. As a remaining human, you’ll need to fight your way through the portal realm, slaying your zombie enemies along the way with your reinforced weapons and your ultimate move (which also becomes available in Phase 2).

If it goes down to the wire, the game enters overtime; if the Heroes have ignited at least 240% of their Soulshines. Heroes and Evil-Ents will both need to grasp this last chance for victory!

Communication is key in Omni’s Nightmare, and it is vital to tap into your full potential and use the voice chat function provided. Evil-Ents and Heroes can only communicate to nearby members of their faction; whereas the Evil-Ent Lord can hear and be heard by all.

Make sure to keep up to date with all the latest NARAKA: BLADEPOINT action on the NARAKA site, Twitter, Facebook, Twitch, Steam, and Discord.