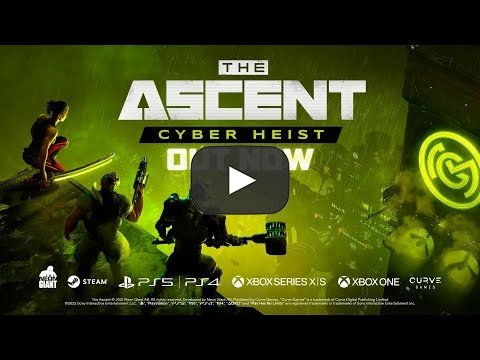 The Ascent: Cyber Heist is set after the base game’s main story and is accessible for those who’ve completed the main campaign and want to take on a new contract for a top-secret mission. Continue the story either solo or co-op with friends in a range of all new main missions and exciting side quests. Players can blast or smash their way through with brand new weapons, including advanced melee combat, in a new never explored before location.

In Cyber Heist, Kira, your former employer, has a new top-secret job, and as a newly independent contractor how could you refuse?  Venture outside of your familiar arcology into a brand new arcology owned by the Malhorst-Gelb Group. There’s some new ground-breaking tech ripe for the taking, but you’re not the only one with their sights on the prize.

There is now a special Cyber Edition of The Ascent available, this includes the previous DLC packages Cyber Warrior and Cyber Sec  plus the new Cyber Heist DLC, all for £36.99/€44.99/$44.99

The Ascent brings you Noghead! Designed by Curve Games and Neon Giant, Noghead Plush is made with an Ultra Soft Fleece exterior that feels amazing! A powerful ally to have in-game and an adorable plushie companion in real life.

To find out more check out the link here: Noghead Plush | Makeship